This section presents artworks that I am currently unable to create, due to time pressures, space requirements or lack of funds. Often, for emerging artists, the ability to create artworks requires the harmonious meeting of not just one, but all three of these elements simultaneously: time, space and money.

As a conceptual artist, many of my works are rigorously considered, and have references and meaning already assigned before creation. It is frustrating that these works live within my mind, and in a sense, are already created, but I cannot yet transfer them to you, without a physical manifestation. Each work is marked by the year it was conceived.

It is my hope this page will serve as a catalogue, representing the artworks I intend to create in the future. If you are interested in learning more about a particular work, or wish to commission or help realise the production of a piece, please do get in touch. I am very open to collaboration and dedicated to the creation of these works for exhibitions or collections.

On a bright summer’s day, place a camera on a tripod onto a large sheet of cyanotype sensitised paper (approximately 3 x 2m). Point the camera downwards, towards the paper, and take a photograph. The camera will photograph its own shadow and that of the tripod’s on the paper. As the apparatus continues to create a shadow on the paper, the cyanotype will expose and record its presence as a photogram. After the exposure, remove the camera and tripod and wash / fix the paper. Once dry, place the paper on the floor, then place the camera and tripod back on the same spot it once stood (indicated by the recorded shadow on the cyanotype). This setup now becomes a permanent sculpture - the camera, tripod and cyanotype paper are never to be separated. On the wall behind the sculpture, place the framed photograph that the camera took when initially recording its own shadow exposing on the cyanotype. With an additonal camera, photograph this sculpture/installation as a work in its own right. Frame and place this installation photograph on the wall directly next to the original photograph made by the camera which has now become a sculpture. Every time the work is shown in an exhibition, an additional installation photograph must be taken, framed, and then placed on the wall, next to the original photographs, which then in turn becomes a part of the piece. 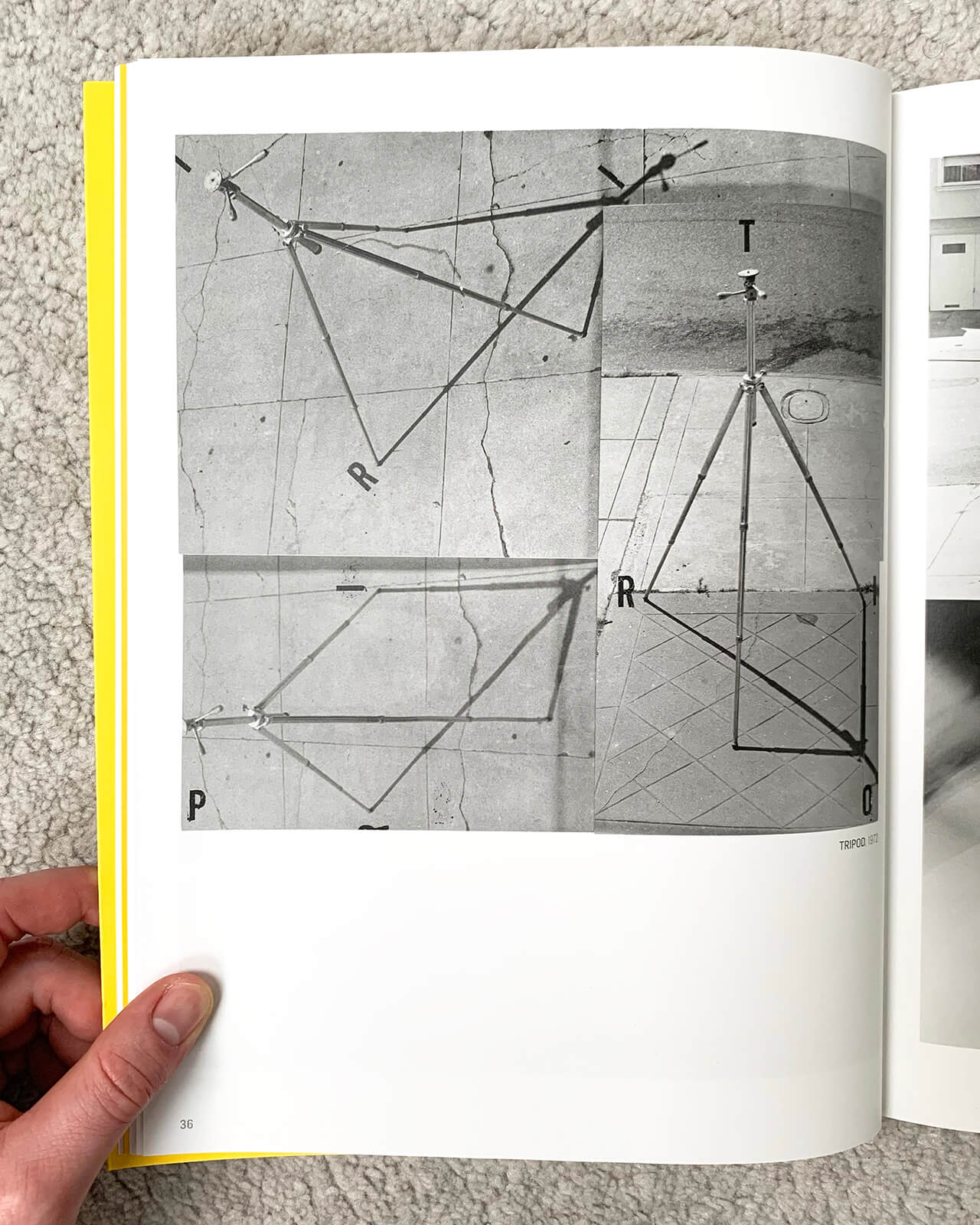 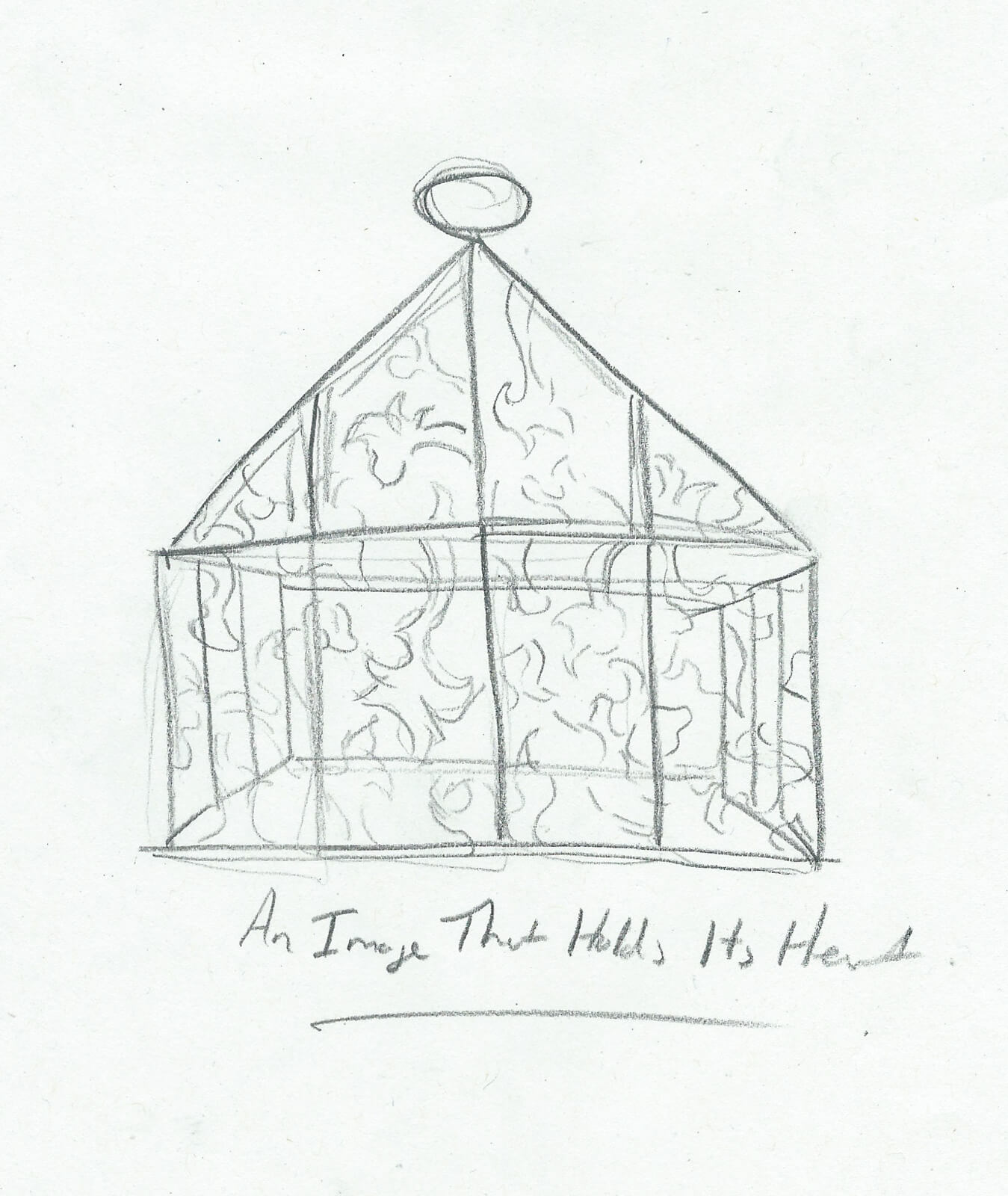 An Image That Holds Its Heat, Artist’s Sketch, 2022

Multiple miniature collodion cloches with a panel of glass making up each of its four sides with additional four triangle sections for the “roof”. Place groups of these cloches, forming clusters, around the exhibition space, in the corners and centre of the space. 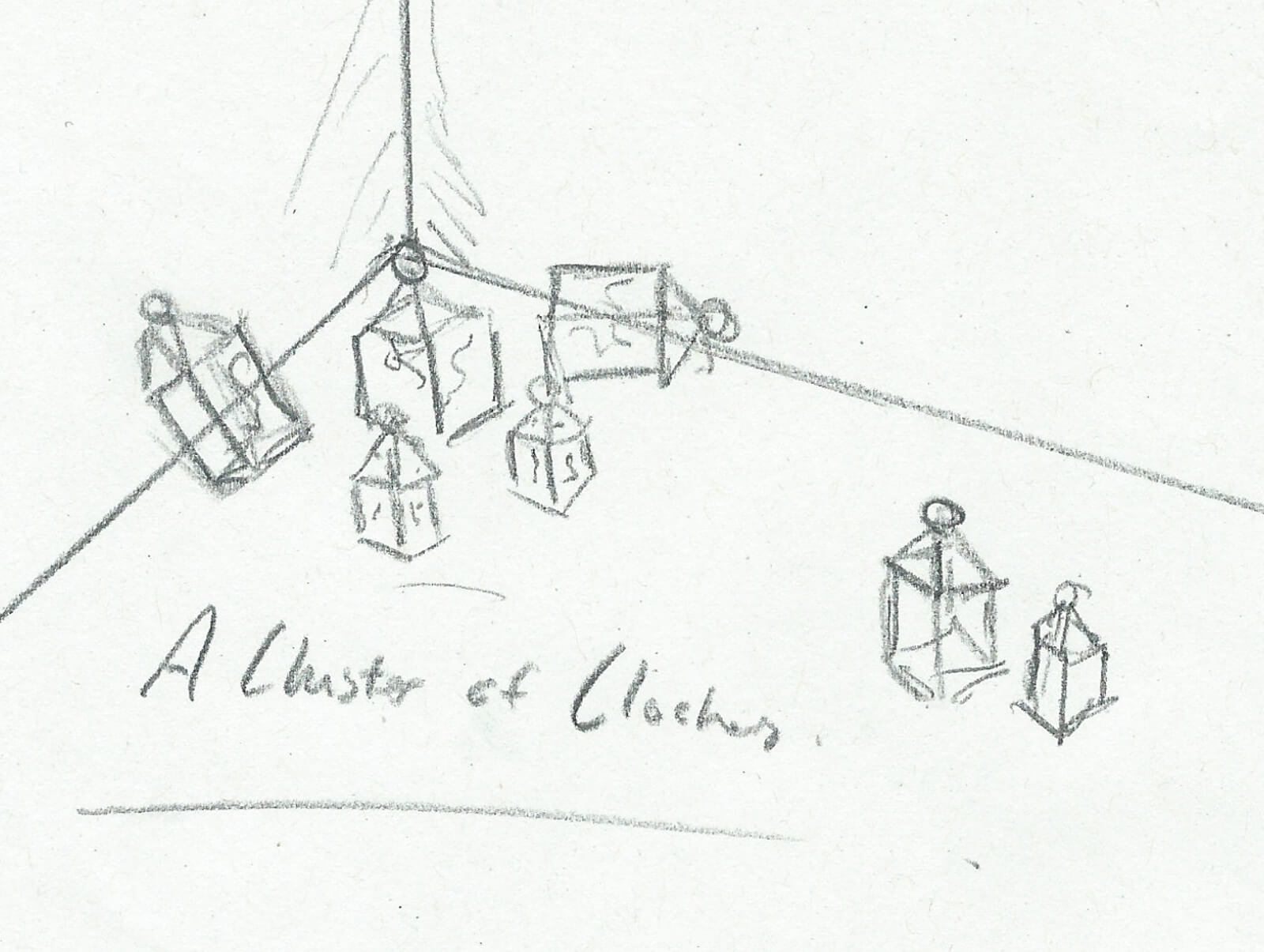 A Performance to Ask the Image to Collaborate (2020)

Artist to place a steel vitrine (approximately 2m x 90cm) in a studio space. Ensure the base of the vitrine is replaced with a sheet of clear rigid acrylic. Prepare hundreds of collodion plate negatives that depict the subject of the greenhouse. To record the following performance, position a camera with a view of the vitrine with space either side for the Artist to walk. Over an unspecified length of time, the Artist will throw and drop collodion plate negatives into the vitrine. It is expected the glass plates will shatter, causing shards and fragments of images to scatter at random across the base of the vitrine. Artist to continue dropping negatives until every negative is shattered. Once complete, stop the camera from filming.

In the darkroom, the Artist will create a large photogram on silver gelatin paper that records the chance shapes and interactions created by the glass shards falling into the vitrine. After developing a successful print, the Artist is then required to collect all the shattered glass negatives from the vitrine, and reperform the process. The Artist continuously reorders the images in the vitrine through the medium of chance, and documents the iterations generated via silver gelatin photogram prints.

The resulting prints should be exhibited hung in a line on a wall. The vitrine with remaining glass shards sits in the centre of the exhibition space. The walls are painted dark grey of black with soft spotlights, bathing the interior of the vitrine and silver gelatine prints with light. The installation is accompanied by the original sound recordings of the greenhouse site by musician Lorenzo Burgio.

Durational assemblage silver gelatin photogram piece (1.2 x 3m) with ivy, framed in steel. In the darkroom, hang a sheet of fibre-based paper (1.2 x 3m) on the wall. Next, layer a “curtain” of ivy on top of the paper. Once completed, stand back and make an exposure using torch lights. An image of the ivy will be recorded as a photogram on the paper. To finish the work, frame the print in a large steel frame and place the curtain of ivy hanging, within the frame, but 8cm away from the print. The ivy object will obscure its own image. Photograph the work installed on a gallery wall. During the exhibition and lifespan of the work, the hanging ivy will decay and rot slowly over time, eventually falling from the piece and revealing its image in its wake. 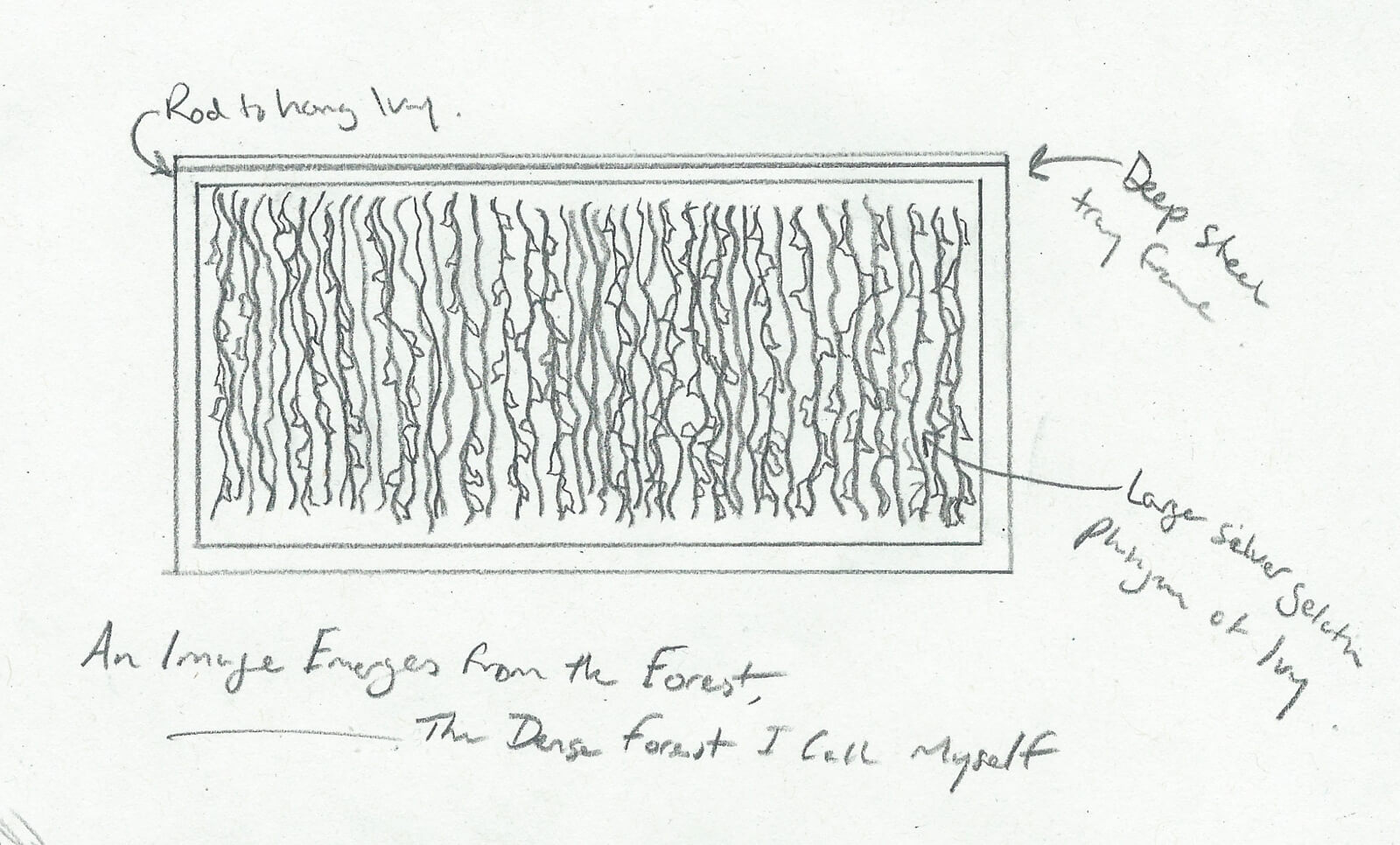 An Image Emerges from the Forest, Artist’s Sketch, 2022

This work is related to An Image Emerges from the Forest (2020) but utilises other flora to create a photogram assemblage work. For this piece, take a branch from a fallen tree, and create a photogram of it on a large sheet of silver gelatin paper (approx 2m x 5m). Scale for this piece will vary depending on the resources available and feasibility of creation. Once the photogram is made, place it inside a large steel vitrine, or low lying tray frame. This installation can be displayed in two ways: first, place the print on the floor of the space, and hang the branch horizontally from the roof, directly above the print, leaving approximately an 80cm gap; second, frame the print in a large, vertical, floor standing vitrine / tray frame, and place in the exhibition space, then position the branch upright too, with the help of steel supports directly in front of the print, leaving an 80cm gap. 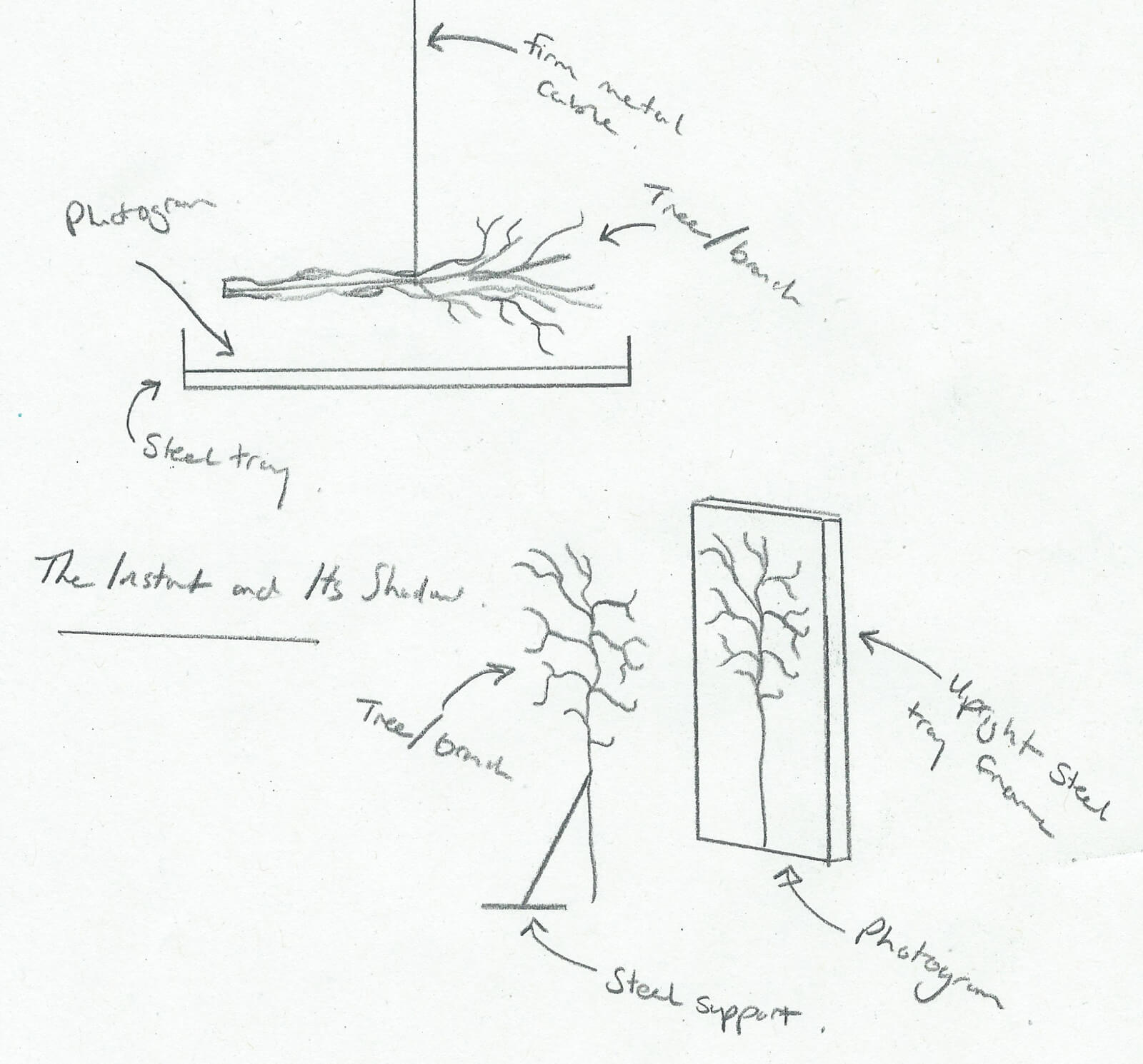 The Instant and Its Shadow, Artist’s Sketch, 2022

Wide reaching multiple arm interconnecting sculpture that has a mixture of collodion plate photographs, organic materials and silver gelatin photograms, arranged in such a way that the movement around, and through the sculpture, brings into view the alignment and potential ‘formation’ of images. This work seeks to materialise the physical equivalence of a mental image process when visiting and photographing a given space. 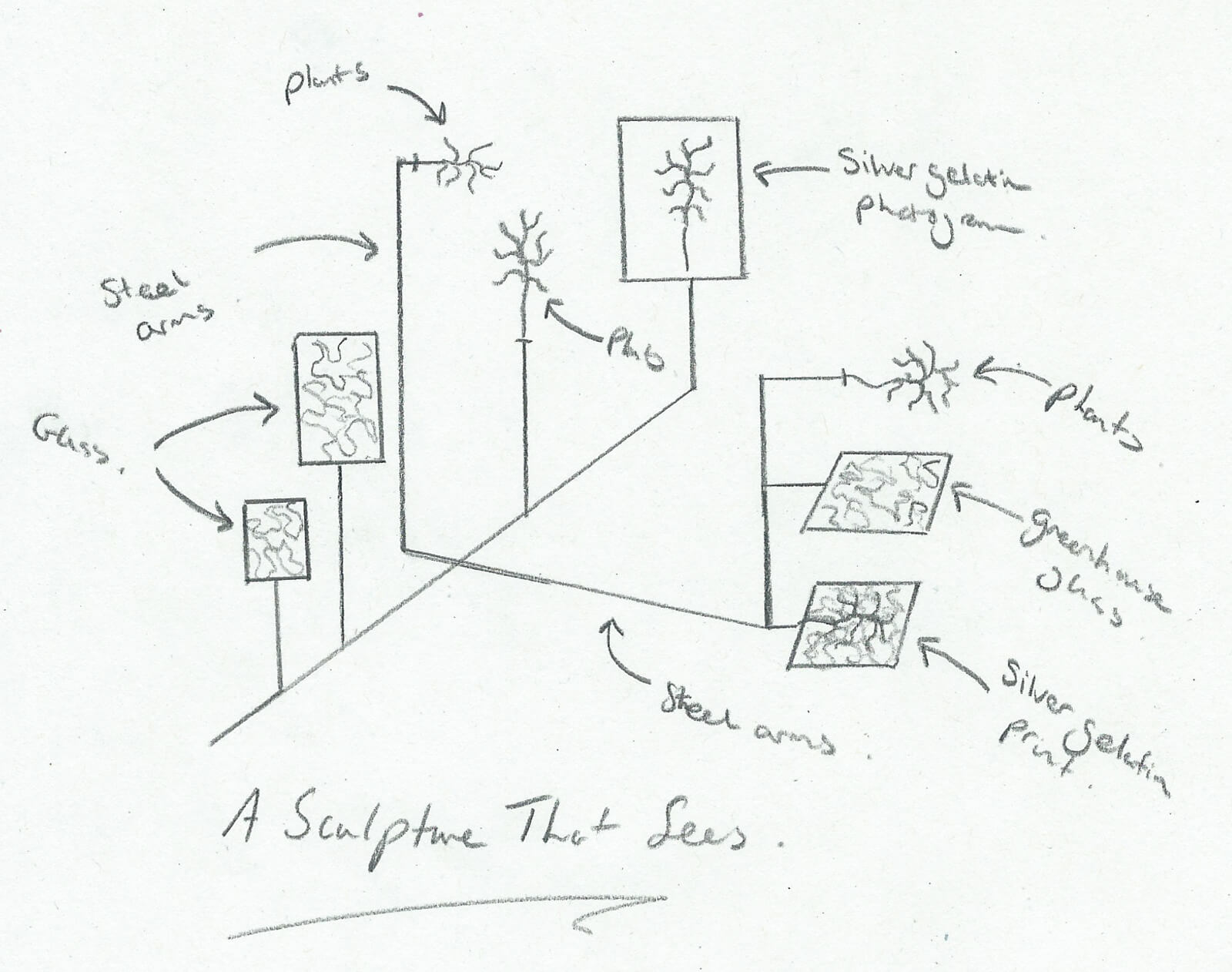 A Sculpture That Sees, Artist’s Sketch, 2022

Super 8mm short film portrait of painter Quentin Martin. Following Quentin at home, packing the car, ready to drive to a location in which to paint. The film is to follow the entire process or driving, arriving, setting up an easel and priming the canvas in the landscape, to the end of the finished painting.

Super 8mm short film portrait of sculptor Rufus Martin. Following Rufus at home, in the studio, sketching a life model and preparing clay to sculpt. The film is to follow the entire process of sculpting the model’s bust, to the creation of a wax mould, and the eventual casting of the bust in bronze.

Scan or take copies of pages from books that contain the Artist’s annotations. Use those scans to make a physical embodiment (metal, casting, laser cut material, bronze, wood etc) with depth of the shape of the annotation. Varying sizes for different books of varying importance. Expand out to a life-scale floor work which can be moved around. Alternative titles: Materialising the Space of Literature, The Terrain on the Page and the Apprehension of Meaning

Dig a large hole in the earth, approximately 8-10m deep and 2m x 1.6m in size. On the base of the hole, layer sheets of glass. Photograph the sculpture from outside looking down into the hole, attempt to catch the shimmer of glass or a subtle refection.

Under the Earth Lies a Glass Shelf, Artist’s Sketch, 2021

Assemblage sculpture on pallet board. Place a large wooden central support column in the centre of the pallet, use this as the core of the sculpture and build outwards. Collect and assemble sporadic materials found on the farmyard to place onto the island. 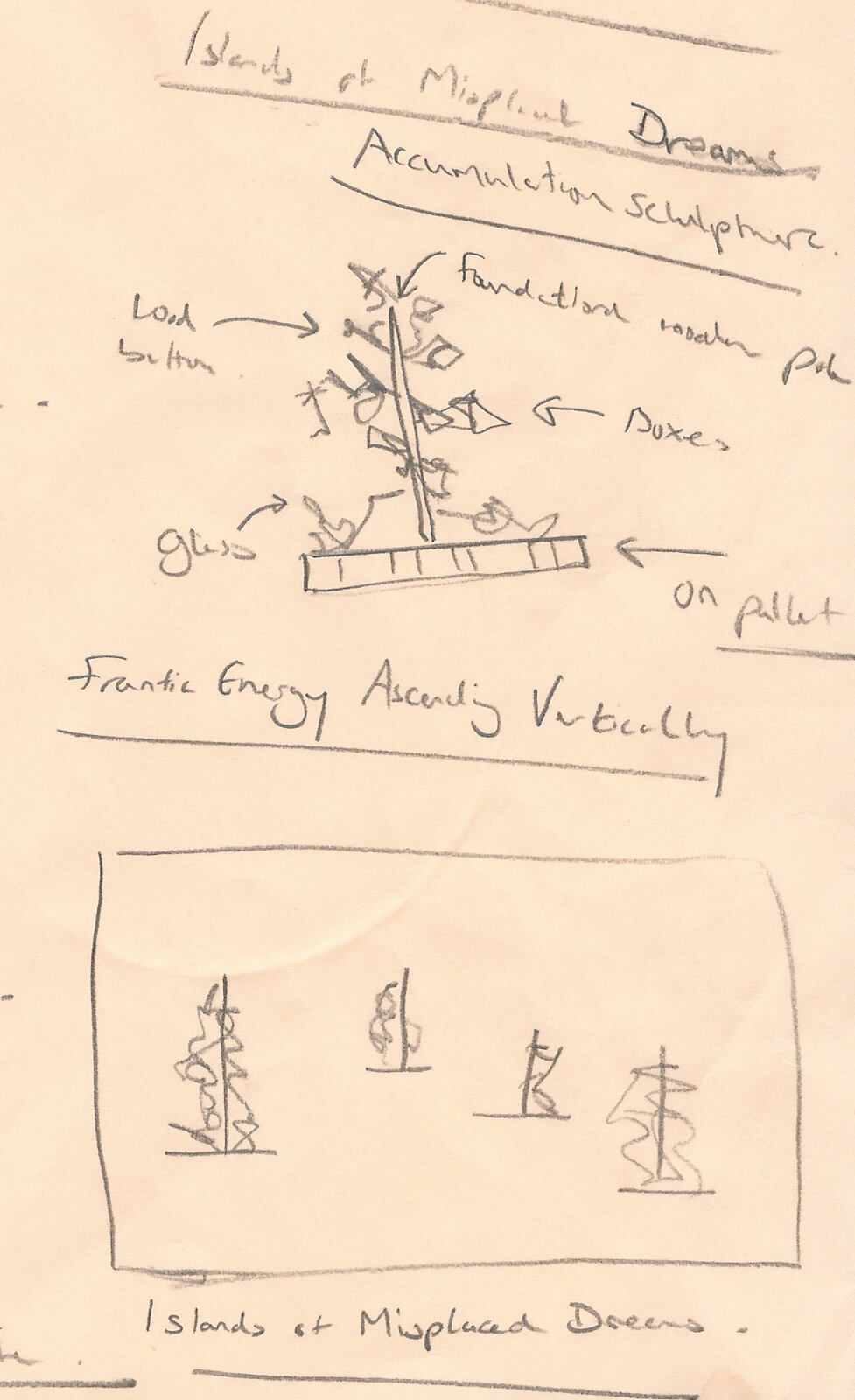 Performance sculpture using glass splashback (approximately 50cm x 3m) from the Artist’s family kitchen. In the studio space, the Artist will place the glass on the floor, and gently lift one end, slowly increasing the gradient of the glass until it’s almost vertical, but continuously held by the support of the Artist. Take a photograph to document the Artist supporting the weight of the glass. 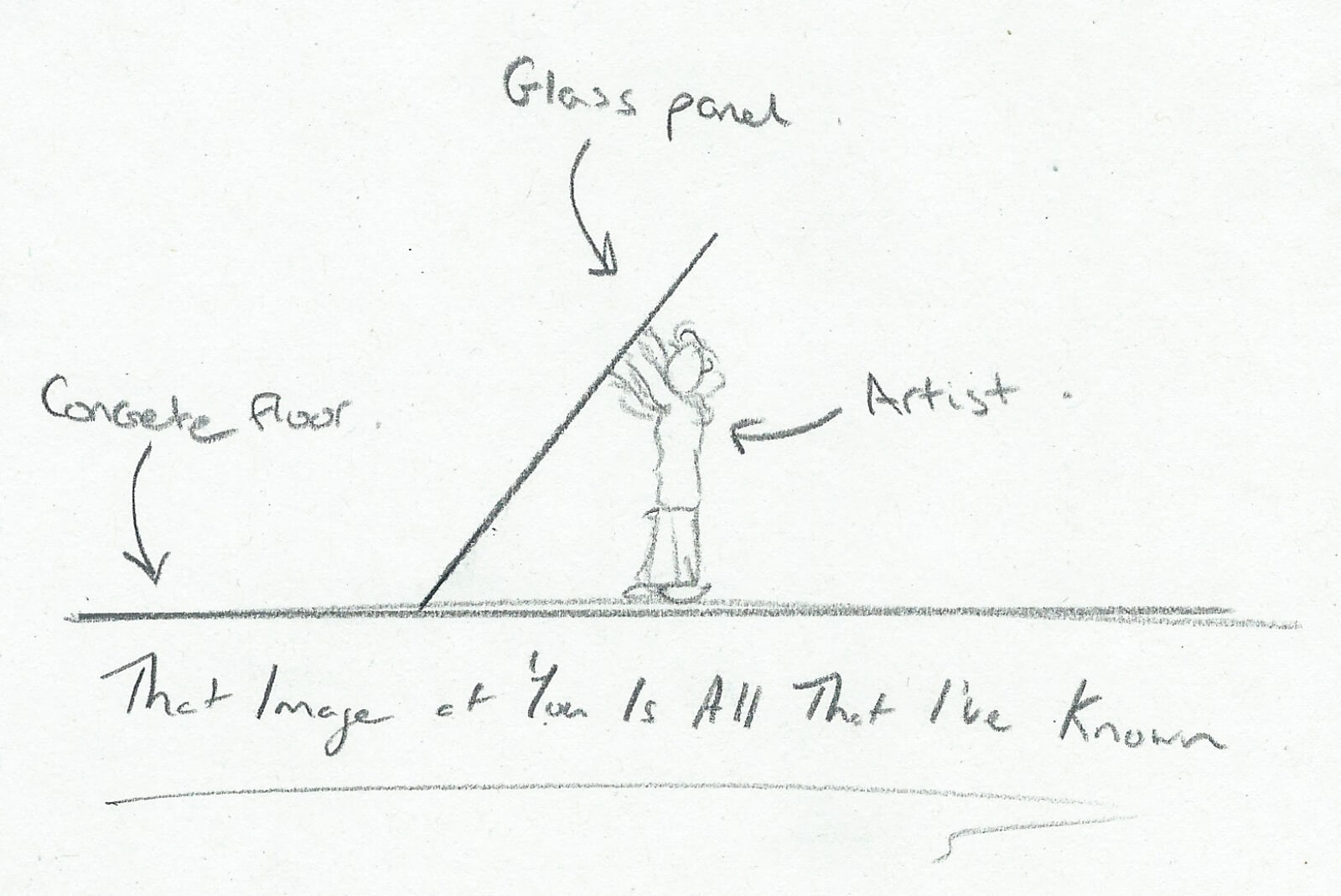